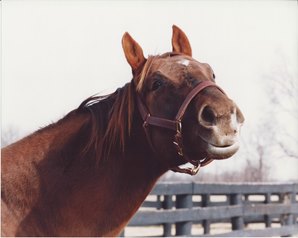 It can be a split-second choice of whether a jockey shoots through an opening or swings their mount outside, or the diligent matter of analyzing pedigrees in hopes of producing a productive runner.

One of the alluring aspects of the sport is how the axis of many can shift as a result of a single judgment call. Thirty-five years after a most challenging situation was addressed, one of racing's most respected operations still marvels at the impact the family matriarch continues to have on generations.

The season of giving is also a season for reflection. And one of the favorite memories evoked around bucolic Mill Ridge Farm is the tale of Begum, a daughter from the first crop of the legendary Alydar who was given a chance by the farm's founder Alice Chandler to overcome odds previously not tackled.

When the chestnut filly was pulled out of her stakes-placed dam, Rullah Good, by Nasrullah, on April 4, 1981, she was a physical specimen of what future racehorses should look like—except for one issue. Where Begum's eyes should have been instead were nubby pieces of tissue, rendering the newborn foal blind.

In that moment, Chandler had a decision to make. Did she pay the $50,000 stud fee and raise the filly as a potential pasture pet or put an otherwise strong foal down? Her instincts as a horsewoman and innate compassion voted for the former, and a teachable moment that would go on for years was born that day.

"My grandmother chose to pay the stud fee and raise Begum as a Thoroughbred and it became this amazing exercise in learning," said bloodstock agent Price Bell Jr., grandson of Alice Chandler and son of Mill Ridge's Headley Bell. "No one had ever raised a horse with no eyes before on the farm, so you kind of started trying to figure it out. They tied a bell around the mother's neck so the foal could find its mother. They grew the grass up really high about a plow's distance away from the fence and then plowed dirt so the foal could feel the long grass and then the plowed field into the fence so it would know when to stop. Those were some technical things they started to learn.

"Then you wondered, is it natural for a horse to graze or is that something they learn from its mother? This horse had no eyes, how do we know it will graze. How do we know what it will do, quite frankly. Through observation and learning, they found that one, the horse will graze; and that two, that she could do OK."

Begum did better than that, actually.

As she grew and thrived despite her handicap, the decision was made to see what kind of future she could have in the breeding shed. Her first live foal, a filly by Diesis named Songlines, became a multiple stakes winner. So too did her third foal, a colt named Binalong by Known Fact.

Becoming a multiple stakes producer is a mark of prestige for any broodmare. What Begum ultimately achieved was foundation mare status as she is the fourth dam of grade I winners Hymn Book and Data Link  .

"She had six foals, three winners, two stakes winners, and one stakes-placed. And, as importantly, she is still alive in pedigrees," Price Bell said. "So this decision my grandmother made in 1981 to pay the $50,000 fee to Alydar is still playing out in my lifetime when I watched Data Link win the (2012) Maker's 46 Mile (gr. IT)."

Hope is the motivator for practically every decision in the Thoroughbred industry. In the angst of a moment, it can be easy to lose sight of that, which is why the Mill Ridge family is especially grateful to have such an enduring example to repeatedly draw upon.

"That's what is so great about this business. You have to look for the positive and the hope," Bell said. "Because I promise you my grandmother never thought that Begum would be a foundation horse for the farm. But when she was born and laying there with no eyes, she felt the right thing to do is give her a chance. That's every decision in raising horses."