We are sharing a beautiful article about OSCAR PERFORMANCE in the Racing Post written by Michele MacDonald. 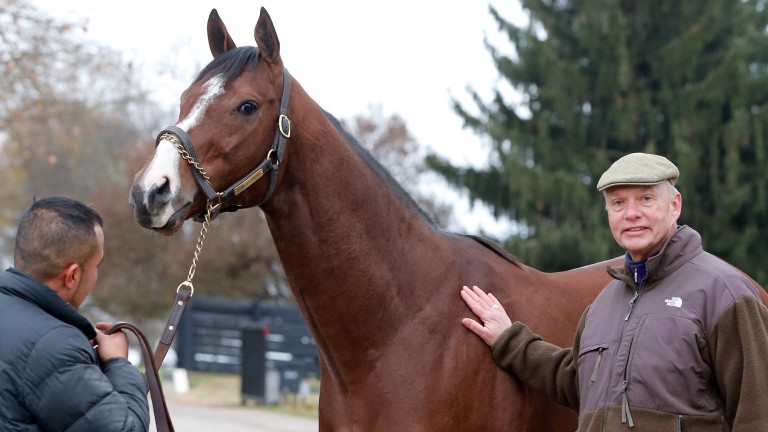 The world is a far different place than it was a decade ago.

In 2009, the global recession had seeped into the veins of racing and breeding like a paralysing narcotic. Glory days faded into bygone eras, sometimes rapidly, such as when Mill Ridge Farm’s prominent sire Gone West drew his last breath following colic surgery not long after he had been pensioned.

Just like that, Mill Ridge – which also had stood the hardy Diesis prior to his death three years earlier – was out of the business of standing high-profile stallions with the capability of siring elite winners around the globe.

Although Headley Bell, who manages the family establishment, aspired to acquire another stallion, he chose to wait and watch over the subsequent years. Slowly but steadily, economics began to improve while the pendulum of what had been a sharp American market bias in favour of precocious dirt horses began to swing back toward longer-term value and versatility.

And then along came record-setting, multiple Grade 1 winner Oscar Performance.

Bell believes the nearly 16.2-hand son of Kitten’s Joy, the sire who was leading his North American peers by progeny earnings up to early December while also having European Horse of the Year Roaring Lion and Dubai Sheema Classic victor Hawkbill to his credit, has the credentials and the support to try to follow in the historic hoofprints Gone West and Diesis left at Mill Ridge.

“That’s our hope,” Bell said in contemplating the future for Oscar Performance, who will stand his first season in 2019 for a fee of $20,000 at the farm.

“We were waiting for the right horse and the right opportunity. We really feel that Oscar Performance is that in every way,” he reflected on getting back into the business of standing promising stallions.

“We don’t want to just do it for the business, we want to make a difference for the breed, if we can. Thankfully, Gone West and Diesis contributed to the breed – and we think this horse can do the same.”

As Mill Ridge rejoins the ranks of commercial stallion stations, Oscar Performance is getting reacquainted with his birthplace.

Foaled on April 6, 2014, at the farm, which is nestled alongside Sheikh Mohammed’s Jonabell Farm in a rolling, picturesque corner of Lexington, Oscar Performance was bred and raced by Mill Ridge clients John Amerman, the former chief executive of Mattel Toy Co., and his wife, Jerry Amerman.

The ties with the Amermans, which go back to the days when the late trainer Bobby Frankel introduced Mill Ridge founder and Bell’s mother, Alice Headley Chandler, to the California-based owners, provide a nostalgic angle to the story.

“They really are kindred spirits. Jerry is truly a horseman, and she and Mom really connected very well,” Bell said. “When the Amermans moved their mares here to the farm – they’ve been boarding here probably 12 years or so now – we assisted them with their matings and picked up the relationship from there.

Through Oscar Performance’s racing exploits, which encompass four Grade 1 victories including the Breeders’ Cup Juvenile Turf over three seasons; his pedigree, which blends Northern Dancer’s sons Sadler’s Wells, Nureyev and Danzig and features multiple lines each of outstanding mares Rough Shod II and Special, and his physical characteristics, which Bell likened to those of a “Hollywood star,” the stallion has much to offer breeders.

“He’s done something few horses have done – win a Grade 1 at two, three and four. That demonstrated his talents,” Bell said, noting such a feat is the hallmark of special horses of the caliber of champions Frankel, Seattle Slew, Affirmed and Spectacular Bid.

As soon as he won a two-year-old maiden race at Saratoga by ten and a quarter lengths and followed that effort with a triumph in the Grade 3 Pilgrim Stakes, Bell said Oscar Performance jumped on the Mill Ridge radar as a stallion prospect. The colt underlined his talent with his 2016 Breeders’ Cup Juvenile Turf victory in 1:33.28 for the mile at Santa Anita Park.

“We expressed our interest from early days and then just let that be it, really. We weren’t on the hustle. We wanted the Amermans to have full opportunity to consider any options they wanted to consider,” Bell recalled of how Oscar Performance came to stand at Mill Ridge.

As a three-year-old, Oscar Performance won both the Grade 1 races on the American calendar limited to his generation on turf, the Belmont Derby Invitational and the Secretariat Stakes, each at 1m2f.

While unplaced in the 2017 Breeders’ Cup Turf won by Talismanic over 1m4f, Oscar Performance returned at four to break Elusive Quality’s 20-year-old Belmont Park course record for a mile in the Grade 3 Poker Stakes, flying home in 1:31.23. That time also reportedly tied the world record for the distance.

In the month following the Poker, Bell worked to sell 15 shares in Oscar Performance and let the word out that the horse would be coming to star in the new chapter about to unfold at Mill Ridge.

Subsequently entered in the Arlington Million Stakes, Oscar Performance was suddenly pulled up when jockey Jose Ortiz felt him take a bad step, but the colt was unharmed and romped wire-to-wire in his next start, the Woodbine Mile, which he accomplished in 1:33.12.

He concluded his career with an unfortunate mishap in the Breeders’ Cup Mile when he was slow to leave the gate as the favourite in the race, which was won by Juddmonte Farms’ Expert Eye.

With a record of eight wins in 15 starts and earnings of $2,345,96, Oscar Performance was ready to start a new career.

His stallion life at Mill Ridge has begun without incident as he has settled happily into his own one-stall barn with a sumptuous four-acre paddock just a few strides away from the breeding shed. The balanced and chiseled bay, who is marked with a white stripe that curves distinctively around his left nostril, has a willing disposition and will become a focal point of Mill Ridge’s Horse Country tours for the public.

With a few more shares still available, Bell said he already has assembled “a fabulous core group of syndicate members in the horse.”

The accomplishments of these breeders betting on Oscar Performance indicate that American attitudes no longer seem as skewed against a turf horse as they appeared to have been following the period when international stars such as Blushing Groom, Lyphard, Nijinsky, Riverman and Sir Ivor (the Epsom Derby winner who was bred by Chandler) commanded patronage in Kentucky.

But every horse has to stand on his own, and the qualities possessed by Oscar Performance – as well as the structure Mill Ridge has formed for his stud career – are attractive incentives.

“His pedigree blend is exceptional – he’s everything you could ask for, truly,” Bell declared. “He’s an outstanding horse and an outstanding physical. He’s got more Nureyev, more Theatrical, in him in his physical appearance than just about anything. He’s got a great, great blend of pedigree.”

Oscar Performance is out of the stakes-winning Theatrical mare Devine Actress, who also has produced his full-brother, multiple Graded winner and millionaire Oscar Nominated, who was claimed away from the Amermans in his third start by Ken and Sarah Ramsey. The Ramseys bred, raced and developed champion Kitten’s Joy into the top sire he has become and pay close attention to his racing offspring.

There are gems in every part of Oscar Performance’s pedigree. He traces tail-female to champion Lady Pitt, whose descendants include Breeders’ Cup Sprint winner Dancing Spree and other Grade 1 winners Furlough, Fantastic Find, Oh What a Windfall and champion Heavenly Prize.

The blue hen mares who show up several times in Oscar Performance’s pedigree left an indelible mark on the breed. He is 5x4 to Special, the dam of Nureyev and granddam of Sadler’s Wells.

Oscar Performance also has three lines of Rough Shod II, the granddam of Special whose other descendants include champions Moccasin, Gamely and Thatch. In addition to her name figuring in his pedigree through Special, she produced Lt Stevens, who appears on the maternal side of Kitten’s Joy’s bloodlines through Group 1-winning Lear Fan.

Other remarkable horses appearing more than once in Oscar Performance’s pedigree include Buckpasser, Native Dancer, Hail to Reason and Nashua.

In shaping the young stallion’s future, Bell said Oscar Performance will be limited to 140 mares in his first book and will not shuttle to the southern hemisphere. Plans were made based on an analysis of what would best for the horse and for shareholders.

“Because we’ve been away [from the commercial stallion business] for a while, we were able to study it and really try to pick the best of what everybody has done,” Bell said, explaining that Mill Ridge’s experience with Gone West’s two-time Breeders’ Cup Turf-winning son Johar led to the decision against shuttling.

“We sent Johar to New Zealand and, nothing against it, but it changed his life. Thankfully, the Amermans care first and foremost about the horse, so it was an easy decision to keep Oscar Performance here.

"We think the world of Australian and New Zealand racing and breeding, but it just doesn’t suit what we are trying to do,” he said.

As to the shareholders, they will have access to two seasons a year for the first four years Oscar Performance is at stud.

“You’ve got eight seasons in four years, and if your mare doesn’t get in foal from your season, you’re refunded the fee. So, you’re either going to get a foal or a fee refund in the first four years, which essentially gets you out on the share,” Bell said, adding that the “no foal/refund of the fee is basically the Lane’s End programme.” 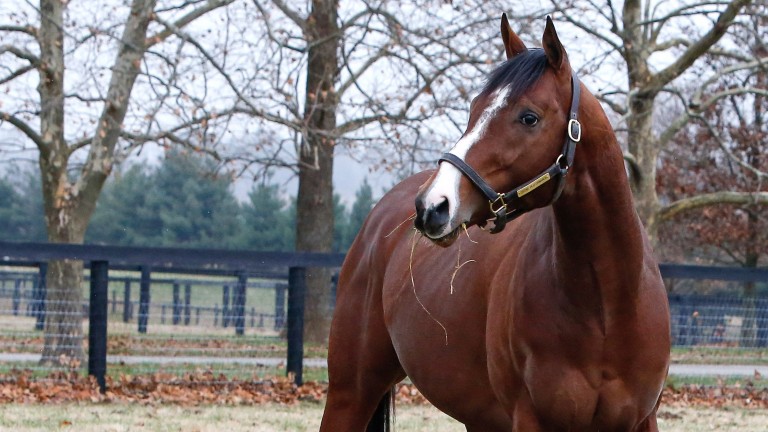 Asked about Oscar Performance’s race record and pedigree being decidedly turf-oriented, Bell did not foresee that being a problem for breeders in today’s market. It’s clear that same kind of profile was no obstacle for Kitten’s Joy becoming a success.

Additionally, American breeders and owners have become keenly aware that approximately 40 per cent of prize-money on the continent comes from races run on grass, and they also have noted sale ring success stories with European-oriented buyers such as Godolphin, Coolmore and Qatar Racing. Grade/Group 1 winners such as Godolphin’s Hawkbill, Qatar Racing’s Roaring Lion and Coolmore’s Mendelssohn all were sold at the Keeneland September yearling sale.

Oscar Performance’s future offspring have the potential to be attractive to European owners and others, including Japanese buyers, as well as Americans.

“The proof’s in the pudding with the purses that are on offer with turf racing. There’s a significant amount of money available,” Bell said of the rich North American races on grass.

So far, breeders beyond those who have invested in shares have seemed enthusiastic when they visit Mill Ridge to see Oscar Performance.

“The response has been wonderful. Everybody who has come out to see him absolutely loves him,” Bell said.

“This is a terrific opportunity,” he added, looking ahead to the possibilities of reestablishing Mill Ridge as the home of notable sires.

It was not so long ago that Mill Ridge’s breeding shed was the inception point for Gone West’s champions Speightstown and Zafonic as well as his dual Breeders’ Cup Mile winner Da Hoss, Belmont Stakes winner Commendable and influential sire son Mr. Greeley, in addition to Diesis’s champion sons Halling and Elmaamul and European classic-winning fillies Diminuendo and Ramruma.

“Gone West and Diesis were so important for the farm, and we were waiting for the right opportunity to stand another stallion,” Bell said. “Oscar Performance was raised here and the Amermans believe in us, so this is just the ideal opportunity.

“With a family operation, this is all we do. Our greatest asset is our land. If you’re not planning on selling the land, you’ve got to figure out a way of staying in the business—and that’s what we’re trying to do.”