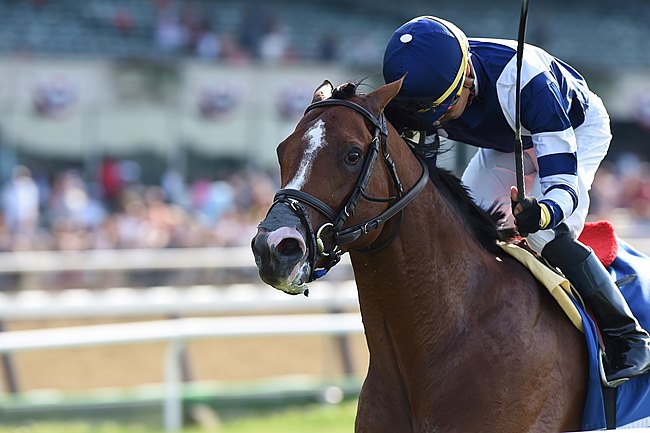 Amerman Racing's homebred Oscar Performance captured the $300,000 Poker Stakes (G3T) June 17 on the outer turf course at Belmont Park and broke the 20-year-old track record. After a six-month layoff and a recent bout of colic, Oscar Performance had a lot to prove in his 2018 debut. Unraced since his ninth-place finish in the Nov. 4 Longines Breeders' Cup Turf (G1T), it was unclear going into Sunday's one-mile test whether the Kitten's Joy  colt would be able to recapture the stride that had defined his early career.  ut Oscar Performance was ready to put on a show.

The three-time G1 winner broke from post 3 under regular rider Jose Ortiz and claimed his spot four wide on the outside behind longshot Black Tide, who set fractions of :22.11 and :44.73 through the first half mile.

Oscar Performance revved up on the turn, challenged new leader Voodoo Song, and sprinted away in the stretch to a 1 1/2-length win in a final time of 1:31.23.

"He was on point and ready to roll today," Ortiz said. "I'm so happy that he's back. He's one of my favorite horses. I won my first Breeders' Cup (race) on him (grade 1 Juvenile Turf in 2016). I'm very emotional right now."

"I thought they were cooking early, and he was in a good location," trainer Brian Lynch said. "Jose got him to the outside, and as they rounded the turn, it looked like he was moving, and he's such a talented horse.

Bred in Kentucky out of the Theatrical mare Devine Actress, Oscar Performance is a full brother to grade 3 winner Oscar Nominated. He improved his record to 7-0-1 in 12 starts with earnings of $1,967,632.